“This film is not only mine, but it is the film of all the activists who were aboard the ship that fateful night and especially those who risked their lives to film and smuggle this footage out, allowing me to use it. It is their film as much as it is mine, and without them this would not have been possible.”

This is how Rifat Audeh, director of The Truth: Lost at Sea, usually opens up his film screenings. As someone who was shot, beaten and kidnapped, along with hundreds of others, he was determined to tell his story, even if it was seven years later.

Passengers prior to being attacked

In 2010, the Freedom Flotilla, a convoy of humanitarian ships carrying activists from 35 countries, attempted to break the illegal blockade Israel imposed on 1.5 million Palestinians in Gaza, highlight it to the world and reach Gaza with humanitarian aid. The Flotilla was attacked in international waters by the Israeli navy, which killed 10 unarmed activists and wounded dozens. The activists were then vilified in the media for daring to defend themselves against this onslaught, and portrayed as terrorists. Audeh, who was aboard the lead ship, the Mavi Marmara, had purchased a video camera to document the journey prior to embarking. He was originally hopeful they would reach Gaza, but of course after the attack, the idea of his documentary took a very different turn.

Audeh, a mechanical engineer, still had absolutely no idea how to make a film, nor had he ever used video editing software either. To make matters worse, the Israeli army had confiscated all footage, cameras and any type of media they could get their hands on from the activists, including his own camera he was filming with aboard the ship. All he had at this point was an idea in his head and the determination to tell the world what really happened and set the record straight.
And so he began working on two parallel tracks. First, he travelled to Turkey to collect any surviving footage that he could, primarily from IHH, the humanitarian relief foundation that helped organize the flotilla. Second, he’d get in touch with a filmmaker friend to obtain video editing software and teach himself how to use it.

Soon Rifat caught a couple of small breaks. For one thing, IHH gladly gave him a copy of everything they had. This included footage smuggled off the ships, the material that was broadcast live during the attack, the news coverages afterwards and footage of the living activists returning home or that of dead activists being buried. Just as important though, was what had happened with Audeh’s own footage, a story he tells audiences frequently.

While at sea, he was able to film approximately 10 cassettes prior to the attack. After being kidnapped in international waters by the Israeli navy, detained and then deported to Jordan with only the clothes he was wearing and his passport, Audeh – like the rest of the 700 passengers- was separated from all his belongings including his media material. So when the Israeli authorities had released the Mavi Marmara to Turkey and the passengers were told that suitcases and luggage were returned, he went to see if any of his personal items of value still remained. He was sceptical since the Israelis had stolen money, credit cards, electronics and valuables from the vast majority of passengers. To his pleasant surprise, as he opened his duffel bag he found four cassettes were still there. It seems the Israelis missed seeing those, as the other cassettes must have been in a different pocket. Only years later would the general public see the footage on these tapes with the release of the film; footage that would belie the Israeli claims and propaganda. 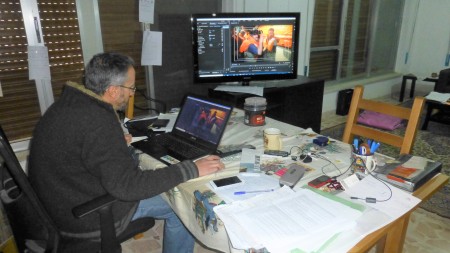 But while Audeh got lucky on a couple of items above, his problems were just beginning. He had no idea how to start putting his film together after collecting all that footage, and his friend who provided him with the editing software was no longer available for any advice or consultation. He was out on his own, like someone in the middle of the ocean who couldn’t swim and had no lifeline. So every time he wanted to make the simplest edit, he would have to research on how to get it done. A 10-minute job for an experienced editor was taking him a week. Finally, near the end of 2011, Audeh produced a 90-minute rough-cut, but he had to put it on the shelf, temporarily at least. The project was simply taking too much time, stress and effort, and there was no budget to bring in any help.

In 2015, Audeh started his Masters degree in media and journalism, and he took a documentary filmmaking course in this program. True, the course provided just the basics, but he utilized these basics of both documentary concepts and editing techniques to fully engage in completing the film after the dissertation summer of 2016. Further, the powerful university computers which had the editing software represented a golden opportunity in place of his home PC, which was slow and kept freezing up. “I would have never forgiven myself if I didn’t take advantage of the university’s facilities while I was there,” he states. And so it began once again, and the film was edited down to less than one hour.

New challenges came in many forms. Certain documentaries on the same event were made by others, but none tackled the propaganda angle like The Truth: Lost at Sea. Nevertheless, it was necessary to use certain clips from these documentaries to complete the film’s narrative. So the chase began to track down these documentary filmmakers in different countries, contact them and get their permissions to use their footage. In addition, the footage compiled included testimonies in Turkish, Spanish and French, none of which Audeh knew. This necessitated finding reliable translators on a shoestring budget. At the same time, he had to research on his own the evidence to include in his documentary, such as autopsy reports, historic facts and UN reports. The hiring of an editor for a couple of months resulted in a bitter experience: after many delays, the editor did not deliver the final product as promised and Audeh had to redo all the work himself once again. Similarly, attempts in reaching out to other filmmakers for guidance and assistance bore no fruit. He now laughs off his misfortunes, adding “I’d be a great teacher on filmmaking now; I can tell anyone all the things that can go wrong and how to avoid them”.

Finally, and perhaps somewhat miraculously, in September 2017 the film was complete, premiering at its first film festival a couple of months later and being nominated there for best feature documentary. Numerous awards followed at various international film festivals. Audeh is now engaged in the process of promoting and distributing the film, a process he is finding just as challenging as filmmaking itself.

The Truth: Lost at Sea stands out not only due to the filmmaker surviving the attack, but also because of its uncompromising message and exhaustive research; the film’s topic was the subject of Audeh’s Masters degree dissertation, which also acquired the “Best Written Dissertation Award” from his university. The film punctures the veneer of lies within the media and lays bare the truth, to stand the test of time.

(UPDATE: THE FILM IS NOW BEING DISTRIBUTED ONLINE. TO BUY OR RENT THE FILM, CLICK HERE. PUBLIC SCREENINGS WITH A FREE LIVE DISCUSSION WITH THE FILMMAKER ARE AVAILBLE ALSO.)